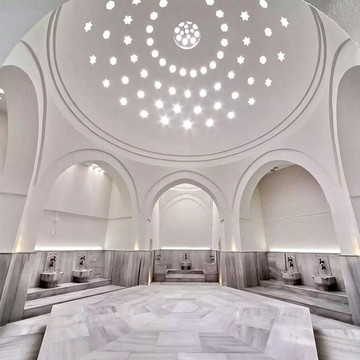 What Are The Best 10 Hamams (Turkish Baths) to Visit in Istanbul?

There are many historical hamams in Istanbul, and it is a very hard task to come up with a Top 10 Hamam list without mixing up different style of hamams. Here is my personal list that includes a variety of hamams. Some of these are fancy, and some are almost ruined, but have a character. Above all, they all resemble the history of Ottoman bathing. Hope you enjoy it.

It is one of the oldest Istanbul hamams dating back to Selim II’s era. The bath section was built by the famous Ottoman architect, Sinan, in 1584. This building dates Sinan’s last period, in which his experience and skills allowed him to combine functionality, elegance and tranquility while keeping his simple design, which avoids overly decorated elements. The architecture of Çemberlitaş bath attracts not only travelers and locals, but many Turkish & foreign researchers, universities, photographers, filmmakers, media professionals and students also study this magnificent structure. A visit to Çemberlitaş hamam can be one of the best Turkish bathing experiences under the huge dome. Try to plan your visit on a sunny day, so that you can get to lay on the göbektaşı, the large hot central stone, while the sunlight beams stream through the holes of the dome ceiling.

Çemberlitaş hamam is located on the Yerebatan Street close to Grand Bazaar. It is listed in Patricia Schultz’s famous book “1,000 places to see before you die” as a must-have experience in Istanbul. This infrastructure is the last Turkish bath house that was built in the Ottoman Era. It was constructed in 1741 by two different Ottoman era architects. Süleyman Ağa started the construction, then Abdullah Ağa completed it. The beautifully detailed building with high domed ceilings, internal marble fountains, interior garden, and two levels of individual changing chambers are still part of a great architectural delight. There is cafe in the hamam and they also held BBQ parties in the garden during summer, fireplace parties in winter. Belly dancer and oriental music groups can also be performed to groups.

According to a myth, the Ottoman Sultan Bayezid II, after a hunting party, was having a walk in the forest, which today has Galatasaray High School and Galatasaray Hamam on it. Bayezid sees a little cabin, and realizes that Gül Baba (Father of Roses) resides in it. Gül Baba is one of the famous dervishes and poets of the era. He was a big inspiration for Suleiman the Magnificent, Beyazid’s father, and joined many wars with him. Beyazid asked him, if he had any wishes. Gül Baba requested an ever-lasting külliye (a complex of communal facilities surrounding a mosque) to be build on the forest land, and he also asked for a big academy, and a hamam with a large dome to be included in the külliye. Then, he offered two roses to Beyazid, one yellow, one red. His wishes were accepted, and the külliye was built in 1481, and Galata Sarayı, Galata Palace, adapted red and yellow as its main colors. Today, the tomb of Gül Baba still resides in the gardens of Galatasaray Lycee. Galatasaray Hamam is one of the famous Turkish baths that has been consistently serving domestic and foreign visitors. The hamam has marble slabs in the soğukluk, the cooling area, which you can get a great massage in semi-privacy. The steam room is very hot, since it’s also used by locals --that’s how they like it. The central large and hot stone, göbektaşi, is also very hot, so you need to lay towels to be able to lie on it.

At The SPA in Istanbul at Four Seasons Hotel at the Bosphorus, you can enjoy our private hammam on your own or share the experience with friends, family or your partner. Surrounded by heated marble, you will enjoy a scrub before relaxing and cleansing your body in a foam bath. Our guests are encouraged to arrive at The SPA 30 minutes prior to their appointment to prepare for the hammam experience in our sauna and steam room. 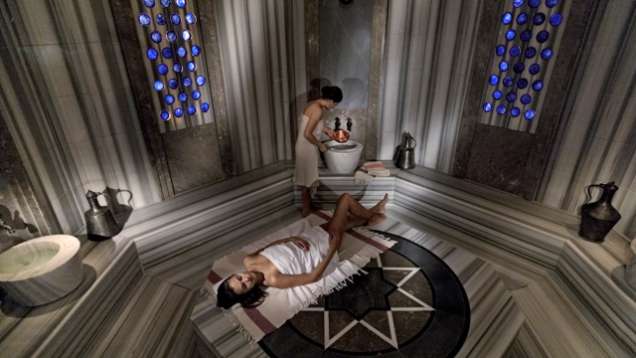 Experience the traditional Turkish Hammam enhanced by the luxurious setting of The Spa at Four Seasons Bosphorus. Whether you choose the 30-, 45- or 60-minute option, this moment will leave you refreshed and renewed, as it has done for people since ancient times.

Kilic Ali Pasa was a slave who made it to Constantinople and then became a captain and gained power, and became famous. He was one of the admirals in the 16th century, who played a significant role in the victories of the Ottoman Naval Army. The most famous Ottoman architect, Sinan, was commissioned to build the Kilic Ali Pasha complex and its hamam that would be named after Kilic Ali Pasa. Sinan built a charming hamam with a magnificent dome and a camekan, the relaxation area, beneath it. The dome is 14 meters in diameter, and 17 meters in height, making it one of the largest domes built by Sinan. Restoration of Kilic Ali Pacha hamam took more than 7 years, in which the original features of the hamam, including the two doors leading from the reception and relaxation area into the warm areas, and many more original details were retained. You’ll get to enjoy the features of Kulhan Chimney/exhaust, the leaded domes and the glass elephant eyes, original kurnas and some carved stone and marble slabs found during excavation, which are kept the same way in order to keep the original design and style of the structure. It is one of the fanciest hamams in Istanbul.

If you are not comfortable at a gay friendly hamam, then I would suggest Aga Hamam in the same neighborhood. Aga Hamam was constructed by Fatih Sultan Mehmet (the conquerer of Istanbul) and was used as his private bath in the 16th century. It serves only foreigners and provides a relax atmosphere for both genders simultaneously. Massages and scrubs are conducted by same-sex masseurs in private rooms. Their prices are lower than their counterparts in the Old City, Sultanahmet.

Haseki Hurrem Sultan Hamam is another magnificent structure built by Sinan, the chief Ottoman architect. Hurrem Sultan, Roxelana, the wife of Suleiman the Magnificent, ordered it to be built in 1556. It was built where the ancient public baths of Zeuxippus (100-200 AD) used to stand, in the middle of Blue Mosque and Hagia Sophia. The area was also a home for the Temple of Zeus, which was moved from Olympia to Constantinople in the ancient ages. The hamam was used until 1910, then it was shut for a long time period. During these times, the hamam was even used as a prison to keep the exceeding convicts at Sultanahmet Prison. Then, it was used as a storage for paper and oil. In 1957, it was renovated for the first time, and served as a carpet bazaar until 2007. The last renovation that helped the structure regain its magnificent look started in 2008, and took three years and costed 17M TL. 1300 square meters of Marmara marble was used during the renovations to be able to bring the hamam into its current condition. Although, Haseki Hurrem Sultan Hamam was built with the classical Ottoman bath style, the hamam was constructed in a way that men and women sections were constructed on the same axis as mirror images of each other. This is also one of the fanciest hamams in Istanbul, and they serve customers with 160 gold plated bath bowls, and silk and cotton (%50-50) mixture pestamals, the bath wraps were produced in Odemis, Izmir.

Süleymaniye Hamam was built as a part of the Süleymaniye Kulliye in 1557. As I described earlier, the kulliye complex has numerous facilities around a mosque.  The Süleymaniye complex includes Süleymaniye Mosque, a medrese, hospital, lunatic asylum, infirmary tombs, a hamam, a market and a primary school. Süleymaniye hamam is also called Dökmeciler Hamam due to the fact that it is in Dökmeciler Bazaar. Again, this is another work of the Ottoman architect Sinan, and it is one of the most touristy hamams in Istanbul. This part of the old city has been protected by the tourism authorities, therefore Süleymaniye hamam has been maintaining its originality. It was opened with a big ceremony, and Suleiman the Magnificent took the first bath after a special ceremony and prayers, and it only served to the members of the kulliye for many years. It has a similar plan to Haseki Hurrem Sultan Hamam, and, it is also built in the period when Sinan was only a kalfa, a semi-master architect.

Mihrimah Sultan Hamam was built between 1562-1565 by Sinan for Suleiman the Magnificent’s daughter, Mihrimah Sultan. Mihr-i Mah, means “the sun and the moon”. Suleiman ordered two kulliyes (one in Uskudar, one in Edirnekapi) to be built by Sinan. There is a myth about these two Mosques. It is said that Mimar Sinan fell in love with Mihrimah and built the smaller mosque in Edirnekapi without palace approval, on his own, and dedicated it to his love. The legend continues to say that on March 21th (Northern hemisphere spring equinox, when daytime and nighttime are equal and Mihrimah's alleged birthday, hence the name) at the time of sunset, if you have clear view of both mosques, you will notice that as the sun sets behind the only minaret of the mosque in Edirnekapı, the moon rises between the two minarets of the mosque in Üsküdar. The Mihrimah Sultan hamam has a square shape camekan area which is built on top of twelve columns. The hot bath room is built under a large dome with four halvets and four eyvans and includes a göbektaşi, octagonal marble slab. There are also a pool and a hot-tub, which are criticized as unnecessary add-ons making the facility lose its historical value.  This hamam has a very authentic and local vibe. The local brides book the entire hamam for their Turkish style "Bachelorette Party" with their friends. You can see photos of it on Instagram, via this link.

Firuzağa Hamam is located on Cukurcuma Street, and it is estimated to be built in 1831. It is also called as Bostanbaşı Hamam, however, Firuzağa Hamam name was more accepted by the locals due to the fact that it is close to Firuzağa Mosque. The external of the hamam is built by cement and covered with mosaics. It has a wooden camekan, and two halvets, and a square göbektaşı  in the hot bath room area. It serves women and men on different schedules at the same facility. This hamam is also listed as a gay-friendly hamam in the gay community websites.

Special thanks to Akif Kuruçay for his book “Istanbul’un 100 Hamamı”. I learned a lot from him.