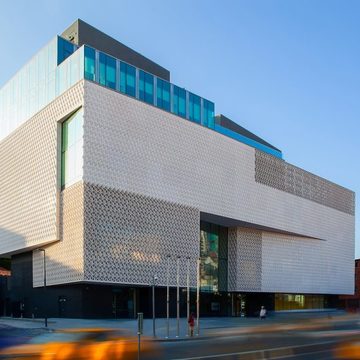 What are the 5 must-see modern art galleries in Istanbul?

In the recent years, Istanbul's art scene has been getting a lot of attention, which has never happened within the history of Turkish Republic. Auctions for Turkish modern art pieces blending modern Turkey and its Ottoman roots hit one million dollar mark. Numerous art galleries popped up as a result of the increasing demand for the artworks of up and coming Turkish artists. Now, art-walks are becoming the new obsession among the Istanbul's hipster scene, and this is all great! Istanbul has entered a new golden era once again. The world is not only interested in Turkey because of its strategic location as the heatwave raises in the Middle East; in addition, Turkish culture getting a lot of attention as Istanbul's vibe gets a lot people excited all around the world. With the increasing demand from international travelers and westerner expats, artsy crowds are becoming more crowded at the intersection of the East and the West. This is a good time to enjoy Istanbul's art scene, and you should definitely check out at least these galleries, if you can't visit every one of them.

Salt is a multimillion-dollar contemporary art space. The name means "pure", "unmixed" in Turkish. Salt is a non-profit institution housing exhibitions, conferences, and public programs. It has two buildings: one located in Galata,  and the other one on Istiklal Avenue. Salt Galata's building used to be the Ottoman Imperial Bank HQ, which was originally designed by Alexandre Vallaury in the 19th century. It maintains a public library and archive of recent art, architecture, design, urbanism, and social & economic histories to make them available for research and public use. Salt Beyoglu, which is located on Istiklal Avenue is an award-winning (Aga Khan Award for Architecture - 2004), three story, 12000 square foot exhibition space also housing the Walk-in Cinema, a cafe, and shop. It's inviting the thousands passing by Istiklal Avenue every day. "SALT is not a museum, art instituion, an architectural institution, research facility, or gallery; it is evertyhing that stands for innovation and alteration" once said the Research and Programs Director Vasif Kortun. Salt Beyoglu - Salt Galata

Rodeo Art Gallery was one the first individual efforts in Istanbul to present international and Turkish modern art work. It was founded by Sylvia Kouvali, a Greek expat, in an old Tobacco warehouse building in Tophane. The name of the neighborhood literally translates to "armory" in English, and it was named after the Ottoman armory, which was built by Fatih Sultan Mehmet, the conquerer of Constantinople. Only in the recent years, the neighborhood has changed dramatically, and became a house for the pioneering art galleries of Istanbul, following the opening of Rodeo in 2007. Sylvia works with a range of international artists such as Egyptian painter Anna Boghiguian and the Cypriot artist Christodoulos Panayiotou; thereby, it connects major cities like New York, Cairo, Istanbul, and bring their art worlds together. Rodeo mostly has exhibitions presenting avant-garde art pieces as well as dance performances that tend to step out the accepted norms. Rodeo recently moved to its new location near Taksim square.

Istanbul Modern is the first private contemporary art museum to organize exhibitions since its foundation in 2004. It is located on a perfect spot on the shores of Bosphorus strait facing the imperial Ottoman palace, Topkapi Sarayi. Apart from the comtemporary and modern art exhibitions, it also houses a photography gallery, spaces for educational and social programs, cinema, a restaurant that would easily be a rival to the museum with its food and Bosphorus view, a design store, and an extensive library.  Location

Pera Museum is another private museum, which was founded in 2005. The museum has three main exhibits: Anatolian weights & measures, Kutahya tiles & seramics, and Orientalist art. Orientalist collection consists of more than three hundred paintings including European artists inspired by the Ottoman world between 17th and 19th century. One of the most famous works featured in Pera Museum is called "Tortoise Trainer", a painting by Osman Hamdi Bey, who has been characterized by historians as the genre's only "native Orientalist". Location

Galerist is located in the same building as one of the most trendy restaurant/bars in Istanbul, 360 Istanbul. Now, in its tenth year of existence, the institution has benefited from a restructure by the new partnership of architect Melkan Gursel Tabanoglu and art collector Taha Tatlici in 2011. Galerist has the strongest international reputaiton of any contemporary art galllery in Istanbul, with a catalog of well-known local artists. Location