Anti-government demonstrations in Turkey seem a little less frequent and well attended these days – at least in Istanbul. Nevertheless, another one has broken out recently in the Altunizade district on the Asian side of the city. As with last year’s ‘Gezi Park’ event, this also focuses on one more green area in a vast megalopolis seemingly determined to cover itself with tar and cement.

Last weekend, the weather being fine, Dilek and I set out to visit an exhibition of an English photographer, John Wreford, who has been working in the Middle East region for some years. In my opinion, you must be crazy or desperate to drive a car in Istanbul in the weekend, so we boarded a double-decker bus that passes the door of our new abode, on its way to the European side of the city. 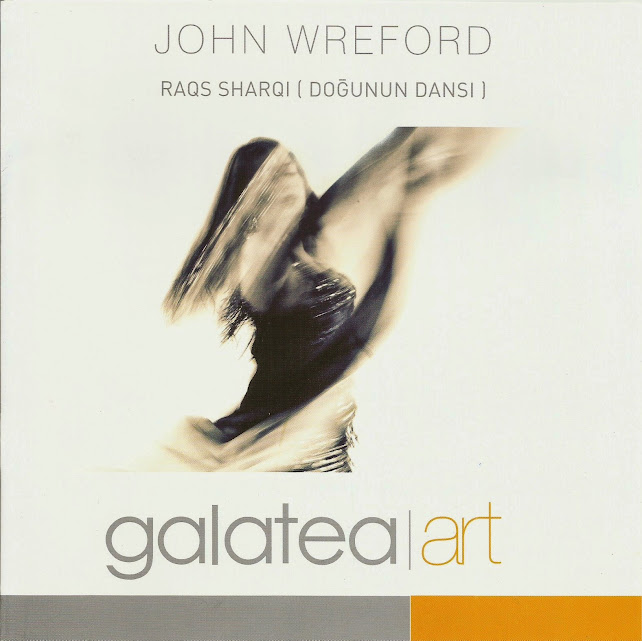 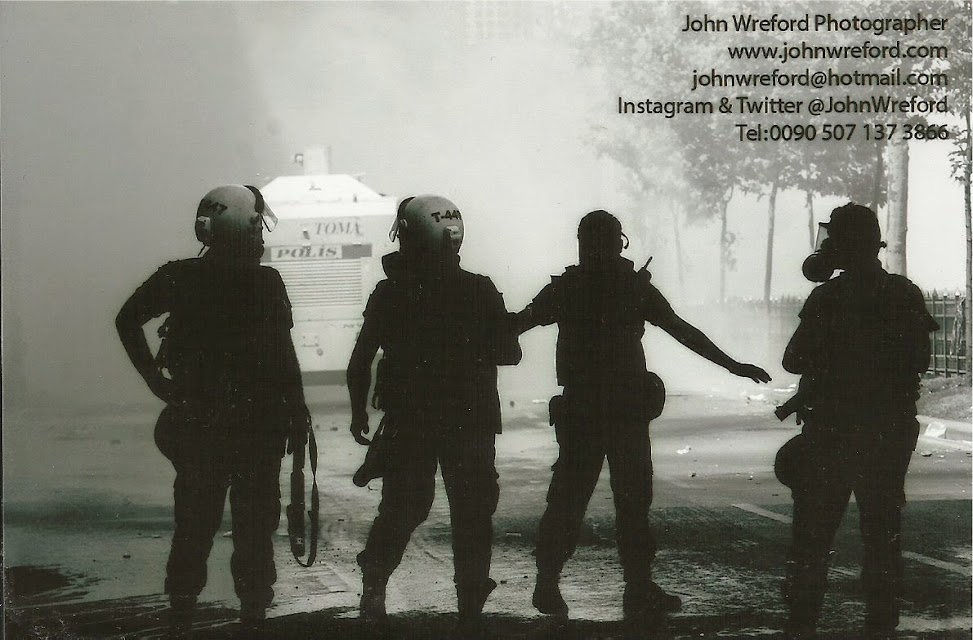 Traffic became increasingly congested as we approached the first Bosphorus Bridge, and our enterprising driver plunged his huge vehicle into a labyrinth of narrow back streets in an attempt to avoid the worst bottlenecks. Our top deck lashed by branches of overhanging trees, we made good time while being treated to expansive views of an unfamiliar part of town – passing on our tour the wooded park known as Validebağ, focus of the demonstrations referred to above.

Around the beginning of the 19th century Sultan Selim III established a little country retreat for his mother Mişrişah. ‘Valide’ was the title reserved for the mother of the reigning sultan so we may think of the park as ‘The Garden of the Royal Mother’. A later Sultan, Abdülmecid, gifted park and mansion to his own mother Bezmialem, who turned it into a kind of botanical garden with local and exotic plants. On her death the property passed into the hands of Altunizade İsmail Zühtü Pasha, scion of a wealthy family of merchants and high-ranking minister in the Ottoman Government – whose name is preserved in the surrounding neighbourhood. Subsequently, Ismail Pasha returned the land and buildings to the royal family, Sultan Abdülaziz had a mansion built for Adile, one of his sisters, and the extensive woodland was used for hunting parties.

For some years, the mansion, known as Adile Sultan Kasrı, and its adjacent garden, have been used as a kind of club and social centre for state teachers. It holds a special place in the hearts of citizens of a certain age by virtue of being the location for a 1975 film ‘Hababam Sınıfı’ starring the beloved comic actor Kemal Sunal and featuring the exploits of a class of roguish high school lads.

Current protests seem to be focusing on what some perceive as a threat to one of the inner city’s few large remaining wilderness areas, and in particular, plans to build a mosque therein. The local and national governments are taking the view that the land is neglected and needs to be developed so that the public can make better use of it – and they claim that the proposed mosque will not actually be built within the boundaries of the park. Opponents of development say that the area should be preserved in its wild state because of its importance to migratory bird species – and they are vehemently opposed to the erecting of another mosque, which they see as exemplifying the government’s Islamification agenda.

Leaving that debate to wiser and better-informed heads than mine, we continued our bus trip across the Bosporus into Europe via the 1.5 km suspension bridge erected in 1973 to join the two continents. An annual highlight for me in recent years has been the day in early summer when authorities close the bridge to motor traffic and allow cyclists to cross. Apart from the exercise, it’s a fabulous photo op. for the unparalleled views it affords of sea, sky and urban sprawl, with the domes and minarets of the ancient city in the distance.

Shortly after arriving on the European shore, we alighted at Zincirlikuyu, making our way along subterranean walkways to the Zorlu Centre, a vast ultra-modern monument to the new Istanbul. The enormous multiple-use complex comprises office space and residential apartments for the rich and famous, a multi-level shopping complex with 200 stores selling high-end merchandise, a food-hall with forty restaurants, terraced rooftop gardens and the largest performing arts centre in the country. It also contains Turkey’s first official Apple store, a sure sign of increasing wealth and disposable income, where I intended purchasing a genuine copy of MS Office to replace the less-than-genuine one that had been giving me problems for some time.

The Zorlu shopping complex (AVM as they are known in Turkey) is still something of a novelty, and the halls were crowded with day-trippers, sightseers, and possibly an actual shopper or two. As we rode an escalator up to the garden level, two well-known stars of popular local soap operas cruised down in the opposite direction. I’m sure I heard Bergüzar Hanım whisper to her husband as they passed, ‘Don’t look now, but isn’t that Dilek and Alan, the famous English teachers?’

Well, we left the crowds to their Louis Vuitton handbags and Lacoste t-shirts, descending this time to the Metro station for a train that would take us to Taksim and İstiklal Avenue, location of last year’s protests, but beloved of Istanbul residents as the city’s main centre for more traditional shopping and a night out on the town. İstiklal is a two-kilometre stretch of art nouveau architecture whose main thoroughfare and adjacent streets contain a bewildering multiplicity of shops, movie theatres, bars, restaurants, cafes, art galleries, and palaces formerly home to diplomatic legations from the imperial states of Europe. It tickles my fancy to imagine how furious those foreign ambassadors must have been when they learnt that the new republican capital would be Ankara - in the 1920s, a remote eastern town indisputably beyond the pale of European civilisation.

Having resisted the temptation of Zorlu’s forty restaurants, we made our way to Hatay Medeniyet Sofrası, an eatery assuredly belonging to a less frenetic era of the city’s history. It’s easy to miss if you don’t know where you’re going – but definitely worth the effort of searching. From the large open space of Taksim Square, a building that catches the eye is a domed and turreted edifice clearly owing more to Christian than Muslim architecture. Hagia Triadas, opened for worship in 1880, is the largest Greek Orthodox shrine in Istanbul, and its existence is testimony to a more tolerant age when Christians of all sects, and Jews, were permitted to build their schools churches and synagogues, live, pray, educate their children, speak their own languages, bury their dead, carry on business and rise to high positions in a society ruled by the Muslim Ottomans.

Interestingly, our restaurant, reached by an unpretentious stairway from the main street, is located in a building owned by the foundation that administers the church. The main dining room looks over its tranquil arboreal garden, a peaceful refuge from the teeming multitudes that throng the street below. Hatay is the name generally used here for the southeastern city sometimes known as Antakya – in ages past, Antioch, once one of the great cities of the ancient Mediterranean. Its cuisine has a well-earned reputation in Turkey – and tourists from neighbouring Arab countries also clearly find it to their taste. Alcoholic beverages are not served, but if you can do without that accompaniment to your meal, you won’t regret your visit.

Well, as you may remember, the primary purpose of this outing was to visit an art gallery, so, well nourished with the culinary delights of Hatay, we strolled the glittering length of Istiklal Avenue to the locality of Tünel at its western end. Tünel is actually the world’s second-oldest and probably its shortest underground railway. Opened in 1875 with only two stations, the line links Istiklal to the seaside district of Karaköy, formerly Istanbul’s main port.

On our right, just before arriving at the upper station, and near the terminal stop of the antique tram that runs from Taksim Square is the rapidly gentrifying area known as Asmalımescit. Ducking down the street of that name we took the first left – and found ourselves in a narrow lane of bars, and cafes. Galatea Gallery is well signposted and located on the upper floor of an old Greek style house typical of those that line the back streets in this part of town. John Wreford is a fit-looking Englishman who lived for ten years in Damascus, Syria, earning his daily bread as a photojournalist. His current exhibition is entitled ‘Raqs Sharqi – Doğunun Dansı’, and portrays in monochromatic images, the Middle Eastern art form commonly referred to in English as belly-dancing. Wreford has used long-exposures to capture the fluid movements of the dancer, and his images are strikingly evocative against the stark white walls and minimalist décor of the gallery.

Before leaving Syria, Wreford had been unable to work for two years because of the civil war that has been tearing that country apart. He arrived in Istanbul just as last year’s ‘Gezi Park’ protests were gaining momentum – so he may have wondered whether the violence was following him. Those particular protests have quietened down, it seems – but more serious problems are facing Turkey now. An estimated two million refugees from that Syrian conflict have now flooded into the country, placing intolerable strain on social services to feed and house them – as well as planting the seeds of a potentially explosive backlash from Turkish citizens. Pressure is being exerted on the government by the USA and its anti-ISIS allies for Turkey to become militarily involved across that border. At the same time, extremists among Turkey’s Kurdish citizenry have been staging protests and carrying out terrorist activities in southeastern cities in an attempt of their own to force the government’s hand.

In such times, it is good to be reminded of the peaceful achievements in arts and architecture of the peoples who have inhabited for countless centuries these lands widely recognized as the cradle of human civilization. We can only hope that good sense will prevail and our political leaders will find a way to bring us safely through the minefields of nationalist and religious bigotry that currently threaten our world.