Stay in Istanbul for some time, mix with Turks, and one of them will very likely offer you a drink of boza. In fact the beverage is found throughout in the Balkan countries and Central Asia, though the recipe seems to vary from place to place.

Essentially it is made from fermented wheat or millet and has a low alcohol content of around 1% - so don’t bother trying to get drunk on it. The boza you are most likely to come across in Istanbul is Vefa Boza – found in most supermarkets but produced by one of Turkey’s oldest companies (founded 1876) whose only authentic outlet is a small unpretentious shop in a back street of the old city not far from the campus of Istanbul University.

The establishment is still operated as a family business from the premises founded by two brothers from Albania, Hacı İbrahim and Hacı Sadık, and their light-coloured, millet-based beverage served with cinnamon quickly became the standard tipple in Istanbul. If you find your way to Vefa Bozacısı, the leblebeci across the road will sell you a portion of roasted chickpeas to complete your libatory experience.

Contrary to common belief, the area you are now in was not named after the boza shop. In fact, the opposite is true. The area had long been known as Vefa and its roots go back at least 400 years prior to the business venture of our two Albanian immigrants. Sheikh Ebu’l Vefa el-Konevi was a Sufi master of the Sühreverdi Sect, born in Konya but brought to Istanbul at the command of Sultan Mehmet II after his conquest of the city in 1453. The once-great metropolis of Constantinople, even before the Ottoman victory, was a shadow of its former glory, much of it in ruins, and its population reduced to perhaps 50,000. One imagines the lengthy siege and final capture did not improve matters, and the young sultan was faced with a daunting project in turning Istanbul into a capital worthy of his expanding empire. Although only 21 years of age, Sultan Mehmet recognized that the city would need spiritual guidance as well as major building construction and repopulation, and Sheikh Vefa was one given the task of educating its future leaders.

A külliye was built as a base for the Sheikh’s activities – not just a mosque but a complex containing a school, a bath house, drinking fountain, alms house for the poor and accommodation for teachers and students. Not much remains of the original buildings, apart from an ancient cemetery, but the local council has recently rebuilt the mosque in recognition of the importance of the site.

Interestingly, across the road from the Vefa Mosque and up a side street, but visible from Vefa Caddesi (Avenue) itself is an even more venerable structure that did manage to survive the ravages of time. My guidebook, ‘Step by Step Istanbul’, in both English and Turkish versions, refers to it as the Vefa Church Mosque, a rather oxymoronic title, and signs on the building itself call it the Mosque of Molla Gürani. It is immediately obvious from the exterior architecture, however, that the building was once a Byzantine church, and this is confirmed when you enter and see Roman marble columns and ornate capitals supporting the domes. Carpets in the main sanctum are also a giveaway, their diagonal lines showing that the direction of prayer had to be re-oriented after the building was transformed into a mosque. Surprisingly after such a conversion, the authorities evidently allowed the cleaning and revelation of Christian mosaics and frescoes. The name of the original church has not been clearly determined, but it may have been dedicated to St Theodore (Hagios Theodoros), and was probably constructed in the 10th or 11th century.

Molla Gürani himself seems to have been an interesting character. Some sources claim he was Kurdish, though this, of course, is subject to some debate - but he was the tutor of Sultan Mehmet II (mentioned above) and became the first Müfti of Istanbul after the Conquest, so the building may have been a mosque for longer than it was a church.

If you want to tour yourself around these lesser-known sights of Istanbul, you will probably want to start from the Süleimaniye Mosque, the grand four-minaretted edifice on the ridge overlooking the Golden Horn and the Eminönü district. I won’t go into detail here because any basic guidebook will give all the information you need. Suffice to say it is more worthy of a visit than the better-known Blue Mosque of Sultanahmet. First, it is a masterpiece of the incomparable 16th century architect Sinan. Second, its garden is an oasis of green peace with a magnificent view of the city; and finally, the restaurants nearby provide delicious traditional Turkish food at very reasonable prices. The barbunya beans on rice (kuru fasulye) are not to be missed!

With a full stomach you can strike out from the western corner of the mosque precinct following a street of old wooden houses renovated as restaurants, Internet cafes and hostels mostly serving the university community. You will pass under an arch of the Aqueduct of Valens, built in the 4th century CE and, for more than a thousand years, a lifeline of the city bringing water from distant springs to fill its reservoirs and supply its fountains and public baths. At this point the aqueduct is somewhat neglected, but restoration is taking place, and it continues for almost a kilometre, one of Istanbul’s more prominent landmarks as it crosses Atatürk Boulevard. You may actually see people walking on top of the aqueduct. As far as I am aware, there is no official access, and city authorities may take a dim view – but, as Turks themselves are often heard to say, ‘This is Turkey’.

A short detour to the right will bring you to another sacred pile of some antiquity, the Kalenderhane Mosque. Again, the brick exterior architecture clearly distinguishes it from most post-Conquest mosques. It is believed to have been the Byzantine Church of Theotokis Kyriotissa, which I am told means ‘The Most Holy Mother of God Enthroned’. Historians and archeologists find the site particularly fascinating since it seems to have been in continuous use since its original construction as a bathhouse in the late Roman period. In the 6th century a church was built, subsequently enlarged and modified, briefly taken over by the invading Crusaders in 1204 and converted to a Roman Catholic monastery until the city was retaken by the Byzantine Greeks in 1261. After the Ottoman Conquest there was another switch of religion when Sultan Mehmet gave it to the Kalenderi Dervish sect, from where it gets its present day name. Of special note are beautiful coloured marble panels on the interior walls dating from the building’s glory days as a church. Frescoes and mosaics uncovered during restoration are on display in the Istanbul Archeological Museum.

From here you can follow GPS directions on your iPhone ;-) to find Vefa Caddesi for a taste of boza and, for the more adventurous, a visit to the church/mosque mentioned above. After leaving the boza café take a left and a right and you will emerge on Şehzadebaşı Caddesi next to the monumental mosque after which the avenue is named. This is one of the early works of the Architect Sinan, commissioned by Sultan Suleiman (known in English as ‘The Magnificent’) in memory of his beloved son Mehmet who seems to have met a violent end in 1543 at the tender age of 22.

Ottoman rulers endeavoured to avoid the difficulties experienced by King Henry VIII in England by keeping a bevy of women on hand for procreative purposes. This expedient, of course, sometimes led to the converse situation wherein there was a surfeit of potential male heirs. Şehzade (Prince) Mustafa was Suleiman’s oldest son and therefore first in line to succeed on the death of his father. Apparently, however, Suleiman preferred the younger Mehmed, whose mother, Hürrem (Roxelana) he had actually married. It is not 100% certain that the lady Mahidevran, Mustafa’s mother, had Prince Mehmed murdered – but it seems not unlikely. Sadly for Mahidrevan and her son, Mustafa didn’t live to take his rightful place on the throne, murdered in turn, by strangling with a bowstring, on the orders of Suleiman as a result of a plot hatched by Hürrem Sultan, her daughter Mihrimah and loyal son-in-law, Rüstem Pasha.

The tomb of Şehzade Mehmed in the garden of the mosque is beautifully decorated with 16th century Iznik tiles. Next to it is a stone column, said to mark the geometrical centre of old Istanbul as calculated by Sinan. According to my guidebook, the column used to revolve – but no longer does.

You may be ready for some refreshments after your voyage of discovery, but I recommend one last quick stopover on the way. Cross the main road to Gençtürk Caddesi and a short distance along you will come to a mosque of far more modest dimensions – which nevertheless is said to have the longest name of all the multitudinous mosques in Istanbul: Kadı Hüsameddin Çamaşırcı Hacı Mustafa Efendi 18 Sekbanlar Camii. This Mustafa seems to have been a man of many parts, a laundryman who became a judge in the religious courts and also completed the pilgrimage to Mecca. In an attractively landscaped garden alongside is a small cemetery housing the mortal remains of eighteen soldiers killed in Sultan Mehmet’s siege of Constantinople back in 1453. The Sekban were originally masters of the royal hunt, later incorporated into the Ottoman military as a company of the much-feared Janissary regiment – the name apparently coming from a Persian word meaning ‘keeper of the [hunting] dogs’. 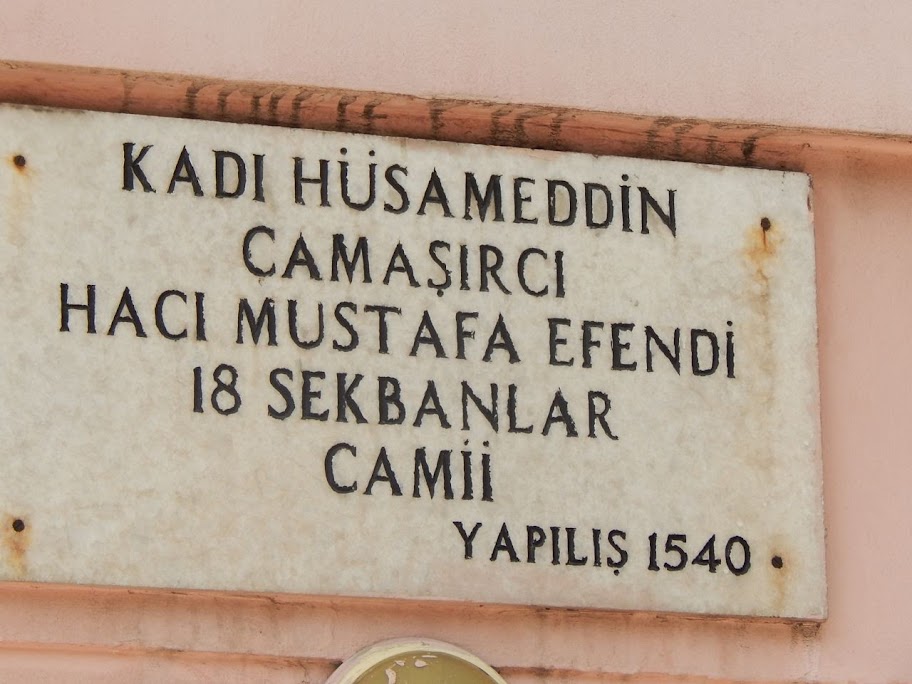 It is now a very short stroll to the Taşhan, a renovated inn or caravansaray built in the 18th century as part of the Laleli Mosque complex. The building’s interior architecture is a little masked by displays of leather jackets and erotic underwear for sale to Russian (and more recently Arab) visitors – but at its centre is an open-air courtyard where you can lie back on cushions and sip tea or Turkish coffee to the restful burbling of water in a small fountain. Active smokers may complete their day by ordering a nargile (water pipe) fuelled by a cake of aromatic tobacco flavoured with the fruit of their choice. Their passive companions may actually find the second-hand fumes not unpleasant.