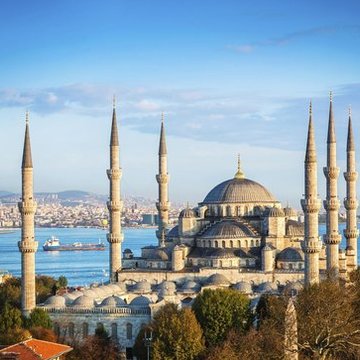 The Ultimate 4-Day Itinerary for Istanbul

First of all, well done. Four days in Istanbul is a good amount of time to get to know the city and perhaps still have time for ogling Cappadocia’s moonscape or walking the marble streets of Ephesus.

One of the keys to understanding Istanbul is experiencing the extreme juxtapositions in the city - modern cafes looking out over ancient sites; Middle Eastern-style bazaars cheek by jowl with European-style art galleries; a horse-and-carriage stuck in a traffic jam alongside BMWs and Mercedes.

So, while the itinerary below encourages you to visit all the awe-inspiring, can’t-miss sights, they are paired with glimpses of today’s modern metropolis.

Day 1: While you’re bright-eyed and bushy-tailed, head to the old city, Sultanahmet, for a spin through the treasures of Constantinople. My ideal day there hits all the major sights, which can be quite a sprint, so take time for coffee, tea, and plenty of Turkish delight along the way.

Hagia Sofia and the Blue Mosque: set across from each other, these are your first stops.

Note that the Blue Mosque (called the Sultanahmet Mosque locally) is a functioning place of worship, so you will have to visit around prayer times.

In the immediate vicinity, the ancient Hippodrome (which takes a bit of imagination as sadly only three decorative columns are still standing), and Basilica Cistern (straight from a scene out of James Bond’s From Russia With Love), are must-see sights as well.

Tea break! Wander by Caferağa Madrasa, a courtyard of artisan workshops just outside the Hagia Sofia’s exit. Take your traditional tea and wander through ateliers of ebru painting...

Back on your feet, head to Topkapı Palace, home of the Ottoman sultans until they built Dolmabahçe (DOAL-mah-bah-chay) palace at the end of the empire.

Don’t miss the exquisite tile work in the sultan’s chambers or the outrageous collection of jewels from around the empire.

Lunch anyone? Get a glimpse of the modern side of Istanbul and stop on Nuruosmaniye Sokak, a walking street near the Grand Bazaar with a mix local and international stores and cafes. The cream of the crop is Armaggan, a palace of its own, featuring modern takes on Ottoman designs.

But head past the gleaming silver tea trays and head to the elevators - the top floor houses a lunch oasis: Nar Lokantası.

Flanked on one end by a Turquoise-tiled open kitchen and on the other by a vertical garden, the greyed wood chairs and rich fabrics exude an air of tranquil modernity. The fare is traditional, though, and features Nar’s line of high end olive oils, vinegars, jams, etc.

The Grand Bazaar. Hopefully you indulged in some baklava or other honeyed dessert - you’ll need the energy. The Bazaar is a chaotic rabbit warren of stores that would all be happy to relieve you of a few lira. Enjoy!

Assuming you find your way out of the Bazaar, wander down hill toward the Golden Horn, perhaps stopping through the Spice Bazaar along the way. Crossing the Galata Bridge, be sure to look back for one of the most romantic views in the world.

An ideal spot for dinner on a first night is just across the Golden Horn in Karaköy: Grifin Tarihi Karaköy Balıkçısı. In a simple room, where the fading Ottoman-style floor tiles provide the only nod to decoration, wraparound windows frame the entire old city - giving you a panorama view of everything you did today. Only their perfect kağıtta levrek (sea bass cooked in parchment) could ensure that you don’t spend the entire evening looking out the window.

If you’re still on your feet, check out the schedule at Nardis Jazz Club, one of Istanbul’s leading spots for jazz, in nearby Galata.

Day 2: Pick up where you left off in Galata, and head to the top of the Galata Tower while it’s early and (relatively) less crowded. The narrow viewing balcony is not for the height-phobic, but the views are phenomenal.

Wander from there up to Istiklal Avenue to get a sense for the energy of the city.

The top of Istiklal is Taksim Square, the “Times Square” of Istanbul, where you can catch the Funicular train back down to the waterfront.

There, spend the afternoon ensconced in Istanbul’s active art scene. The Istanbul Modern, housed in a former warehouse by the water, offers both intriguing exhibits and a delicious lunch at the sleek cafe.

After lunch, wander over into grittier Karaköy to gallery hop. For refueling, settle into Karabatak for a European-style coffee in vintage-cool surroundings.

...or go traditional with the best baklava in the city at Karaköy Gulluoğlu.

Don’t leave the neighborhood without indulging in a Turkish bath at one of the recently refurbished centers for scrubbing: Kılıç Ali Paşa Hamamı. (Learn more about hamams here.)  Squeaky clean, get ready to sample some more Turkish delicacies.

Wander back up the hill to Galata, perhaps finding the elegant Bankalar Avenue and Camondo Steps along the way.

Taste a few wines from Turkey’s growing viticulture industry at Sensus wine bar, then continue up elegant Meşrutiyet Street toward the Pera Palace Hotel. Take a peek inside the art-deco lobby of the hotel where Agatha Christie is said to have written Murder on the Orient Express.

But then head across the street for dinner at Meze by Lemon Tree. And while a banana-nut-cream-and-chili dessert may not sound like an obvious choice, trust me. You don’t want to miss it.

Day 3: Turkish breakfast is an institution - most popular with locals on Sundays by the Bosphorus - but available every day of the week. Find some of the best versions here and gorge on cheese, tomato and cucumber, simit, borek pastry, and honey and cream - all washed down with plenty of tea or Turkish coffee.

Now, you’ve been gazing at the Bosphorus for two days - it’s time to get out there. Day three is for a Bosphorus cruise and exploring some of the neighborhoods and sites up that busy strait. Cruises are available through the public ferry system as well as via private guides. On either, you can hop on and off in order to explore a bit. The classic pit stop is in Anadolu Kavağı for a traditional fish lunch by the water.

On the way back, hop off at Beşiktaş to swing through Dolmabahçe Palace, the Ottoman sultans’ over-the-top version of Versailles, built just as the Empire was crumbling.

From there, visit the over-the-top styles of today, just up the hill in Nişantaşı, where a well-heeled crowd peruses premier local and international shops.

Slip on your Gucci shades and stop for a see-and-be-seen coffee at Delicatessen, an achingly hip spot that still manages to have some of the best international food in town.

Now that you’ve gotten an introduction to Istanbul’s elite life, head out to the other bastion: Bebek. The center of the communities on the Bosphorus, Bebek is a leafy neighborhood reminiscent of California’s Sausalito.

Wander the windy streets and waterfront park, then schlep up four flights to Mangerie, a relaxed cafe with a sparkling view and a killer brownie.

Finish the day or night at Lucca, Istanbul’s yuppie ground zero. Open from breakfast through late-night, Lucca has good food and drinks (try the satsuma cocktail), but really hums because of its omnipresent, attractive crowd.

Day 4: If yesterday was a glimpse of modern Istanbul, step back in time to take a spin through Istanbul’s famous markets. Start on the Asian side, exploring the quaint neighborhood of Kadiköy, known for its food bazaar.

Then, take the ferry back to Eminönü to explore the Spice Bazaar (known as the Egyptian Market here). If you’re feeling inspired, wend your way to the Rüstem Paşa Mosque, built by Sinan practically on top of the market.

For superlative kebap with an even more superlative view, join the lunchtime throng at Hamdi, a multi-story meat emporium on the Eminönü.

Bring the smells and tastes of Turkey home by taking a cooking class of traditional Turkish foods. Our favorite is offered in the home of the chef, but the larger culinary schools here also offer day courses (Istanbul Culinary Institute; MSA Culinary Arts Academy of Istanbul).

Then again, if you’d rather eat what someone else puts in front of you, round out your trip to Istanbul with a modern-traditional one-two punch. On Istiklal, head up to sleek Leb-i-Derya on the roof of the Richmond Hotel, and look out at all of the exploring you have accomplished.

For dinner, though, get back down to earth and head to the Nevizade area for a traditional dinner of meze, paired with rakı, all out in raucous sidewalk or balcony seating.

Dinner can stretch well into the evening from here, but if you are looking for a new venue, check out what’s playing at Babylon, one of Istanbul’s favorite music venues.

Do you think this article is useful? Comment and share your opinion with others!
Sightseeing Sultanahmet Istiklal Itineraries Istanbul101

American Expat living in Istanbul - working, exploring, and eating all the mezes she can get her hands on.