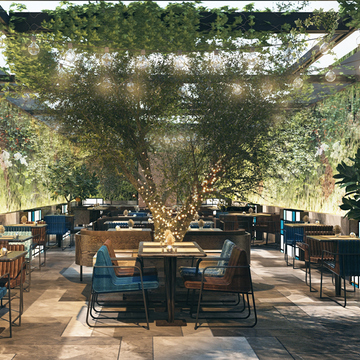 Nopa, the secret garden tucked into an unassuming entrance less than a minute's walk away from Tesvikiye Mosque in the ritzy Nisantasi, has the unique ability to harmonize a formal dinner setting with a laid-back atmosphere without seeming like it's trying too hard. Owned by the same people who manage The House Cafe, the month-old restaurant is the new hotspot for those seeking a venue for a nice date, business dinner, or just a fun night out with your friends. Whatever your reason, be sure to dress up a bit or you might not fit in with the rest of Nopa's fashionable crowd.

As I walked through the front entrance, Nopa looked just like all the other fancy restaurants that populate the area but, once inside, it was a whole new world. I had arrived expecting to find just another restaurant in Istanbul striving to fashion itself as the mecca for the sophisticated urban elite of the city. Instead, I was transported into a tropical haven, providing much-needed greenery in a city filled to the brim with concrete and construction. Nopa's unique ability to combine high-end menu items with casual yet professional service is probably why people like the president of Galatasaray and the owner of newspaper daily Hurriyet frequent this place.

The first thing I noticed while walking in was the lush vegetation that coated the walls, with splashes of white and pink coming from the flowers embedded in the restaurant's green surroundings. Upon closer examination, I was surprised to learn that every single leaf adorning Nopa's walls is 100% real. In addition to the foliage encircling the space, the back wall showed off a miniature waterfall that completed the natural ambience of the restaurant. Made of glass with a receding awning, the high ceiling allowed for ventilation, which explains the lack of cigarette smoke saturating the air despite the dozens of smokers inside.

The service was very good-not too pushy but attentive enough to let you know that they cared. All the waiters spoke good English and, unlike at most eateries in Turkey, they didn't immediately take our plates the second after we finished our last bite of steak. The waiters never lurked or made us feel rushed but we always managed to catch their attention quickly whenever we needed something. Be sure to make a reservation, though, because Nopa is full every night.

The superb menu at Nopa consists of rarities in Istanbul, like crab cakes and T-bone steak, but also offers a few modern twists on traditional favorites, such as eggplant purée pasta and grilled lamb chops. I had the bonfile (steak with no bone) cooked medium served with a black pepper gravy sauce and was delighted to find each piece melt in my mouth. Tender and juicy, the meat was a welcome change to the usual kebap. The real gems at Nopa, however, are on the cocktail menu. Every drink on the menu was handpicked by the official head bartender and unofficial face of Nopa, Kevin.

Kevin is easy to spot. He’s the American male with dirty blonde hair, floating from table to table, chatting up Nopa’s patrons. He wears many hats to build the restaurant’s reputation. One minute he’s the man behind the bar, concocting alcoholic masterpieces, then the next minute he’s the waiter, taking your order and bringing the check. A former bartender at The Standard in New York City, Kevin has brought an American flair to the cocktail menu items.

The Nopa, the namesake of the restaurant, is a somewhat glorified Moscow Mule, a blend of vodka and freshly squeezed lime with a splash of ginger syrup and soda, topped by a few sugary ginger slices and served in a copper mug. Another great drink is the Bloody Mary, infused with generous amounts of horseradish that give it a spicy kick, just like the American classic was meant to taste. My personal favorite is the Burnt Whiskey Sour, a combination of bourbon whiskey, egg whites, smoky caramel syrup, and fresh citrus.

Around 9:00 PM, the DJ took his spot at the turntable by the bar and played upbeat electronic music, intermittently switching it up with reggae and jazz to liven up the mood. After a while, I found myself just sitting there, sipping on my drink and soaking up the atmosphere. I was totally satisfied with my dining experience. As I was heading out to leave, I found myself looking back to try and say a quick goodbye to Kevin, a testament to the restaurant’s ability to make its patrons feel welcome and at home. He was busy making drinks behind the bar and making his rounds around the tables as expected, so I continued out to go back home. But I knew I would be back again soon.