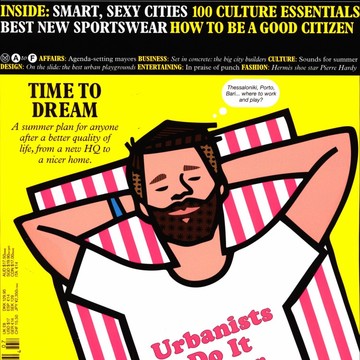 This is Monocle's Guide to Istanbul, which is a printed one-pager I found at their shop-in-shop corner at Beymen Store in Zorlu Center.

Monocle is a London-based magazine that covers international affairs, trends, business, culture, and design. Online Monocle focuses on broadcast and has become one of the most viewed news sources in many of our key markets. Monocle's journalists report from around the world and craft films that are more documentary in form rather than a collection of clips.

Here is video on their team, vision, and company, which was founded in 2007.

Recently, I stopped by the Beymen store at Zorlu Center in Zincirlikuyu, and realized that Monocle opened up a shop-in-shop within Beymen. Apparenly, they are also opening up an Istanbul office quite soon according to my friend Ekin. There was an interesting city guide they printed and left for their visitors, and I thought it would be great to share it with Atdaa readers. Here is all the places, things Monocle suggests to people visiting Istanbul. 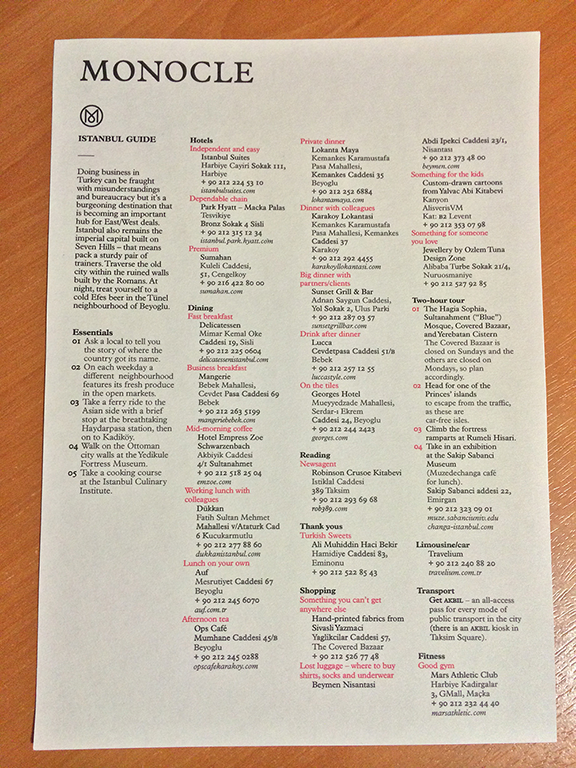 Doing business in Turkey can be fraught with misunderstandings and bureaucracy but it's a burgeoning destination that is becoming an important hub for East/West deals. Istanbul also remains the imperial capital built on Seven Hills - that means pack a sturdy pair of trainers. Traverse the old city within the ruined walls built by the Romans. At night, treat yourself to a cold Efes beer in the-fund neighbourhood of Beyoglu.

01. Ask a local to tell you the story of where the country got its name.

02. On each weekday a different neighbourhood features its fresh produce in the open markets.

03. Take a ferry ride to the Asian side with a brief stop at the breathtaking Haydarpasa station, then on to Kadikoy.

04. Walk on the Ottoman city walls at the Yedikule Fortress Museum.

05. Take a cooking course at the Istanbul Culinary Institute.

Lunch on your own

Kaan's note: As far as I know, this store is about to be closed. If so, you should go to Robinson's SALT GALATA branch instead.

Something you can't get anywhere else

Lost luggage - where to buy shirts, socks and underwear

Something for the kids

Something for someone you love

01. The Hagia Sophia, Sultanahment ("Blue") Mosque, Covered Bazaar, and Yerebatan Cistern The Covered Bazaar is closed on Sundays and the others are closed on Mondays, so plan accordingly.

02. Head for one of the Princes' islands to escape from the traffic, as these are car-free isles.

Get AKBIL - an all-access pass for every mode of public transport in the city (there is an AKBIL kiosk in Taksim Square).