Istanbul, You Light My Fire!

“Istanbul, a universal beauty where poet and archaeologist, diplomat and merchant, princess and sailor, northerner and westerner screams with same admiration. The whole world thinks that this city is the most beautiful place on earth.”  Edmondo de Amicis

When I told people I was going to travel alone, I saw both excitement and mixed reaction.  “Are you happy” or “Why didn’t you invite 4, 5 people in?” Perhaps I could have, but I was certain I wanted to make this trip happen. Days before my flight, Taksim Square was awash with demonstrations over the Soma mine disaster. And despite a few changes, I was ready for this city. Perhaps, I was longing for a vibrancy that only a city the size and variety of Istanbul can offer: people in the millions, rush hour, public transportation, heritage and old stories of a land founded on visions, East and West, waters that traverse the city and its suspension bridges.  I flew then to the former Constantinople on an early morning flight via Turkish Airlines and spent four days reveling in the city.

What drew me to go to Istanbul dates back to my curiosity after Turkey applied to accede to the European Union, bringing in debates as to what it meant for Europe and its potential cultural impact on its largely Christian tradition. Setting aside politics, Turkey is known for its diverse cultural heritage from the Greeks to the Ottomans and its East – West mix, divided only by thin boundaries. A friend once tagged me in a picture of Cappadocia’s hot air balloons hovering over its rich geological landscapes. Early christian roots can also be found here (Ephesus, Smyrna). As a cut between East and the West, it has a tradition of secularism and democracy. Many colleagues in the region who have traveled to Turkey and its cities raved about it. I heard the night life is also vibrant.

As a solo traveler, Istanbul is a good place to start my exploration. With so many picturesque views and new sights, I nearly got overwhelmed. I have been warned enough of lurking Turkish men (no talking to strangers, dress conservatively). It’s not totally uncommon to walk away with a proposal at the end of the trip. But depending on your kind of thing, Istanbul has a lot to offer. I share some of the things I soaked up in and explored on my four days in Istanbul.

I started my first day on a Bosphorus ride. I found it a good way to breathe after an early morning flight and get warmed up to Istanbul. The smell of the sea did get into me.  Geographically, the Bosphorus strait, also the world’s narrowest strait for international navigation, forms part of the boundary between Europe and Asia. 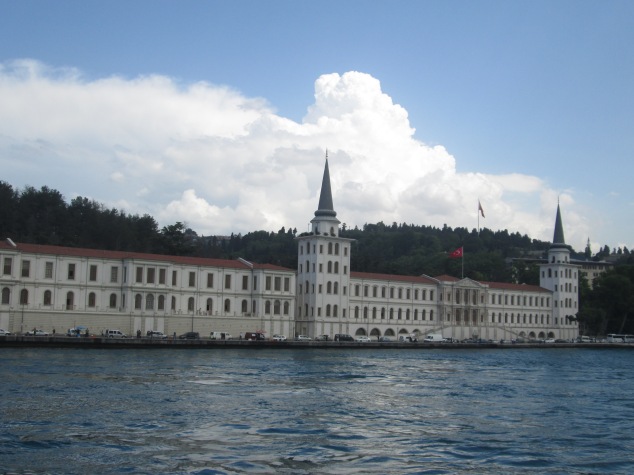 On the same day, I hied off to Pierre Loti with a viewing point of the European side. Divisions between Asia and Europe are quite known and many Turks I talked to have not crossed over to the Asian side. The entire landscape can also be enjoyed with a 90-second cable ride. Pierre Loti  was a French novelist and naval officer who published a short novel  Fantôme d’orient based from his trip to Istanbul. Legend has it that Pierre Loti fell in love with a Turkish woman, promising to return for her. News of her death greeted him upon his return.

Head off to Sultanamet, the old part of the town where you find many of Istanbul’s famous historical landmarks, among them the Blue Mosque, Hagia Sofia, Topkapi Palace, the Grand Bazaar, and the Basilica Cistern. Sultanamet Park hosts the Egypt obelisk and the Wilhelm III fountain. There are many boutique hotels and restaurants in and around Sultanamet. I stayed at Hotel Nena, which was a five-minute walk to all the historical places and the tram stop. 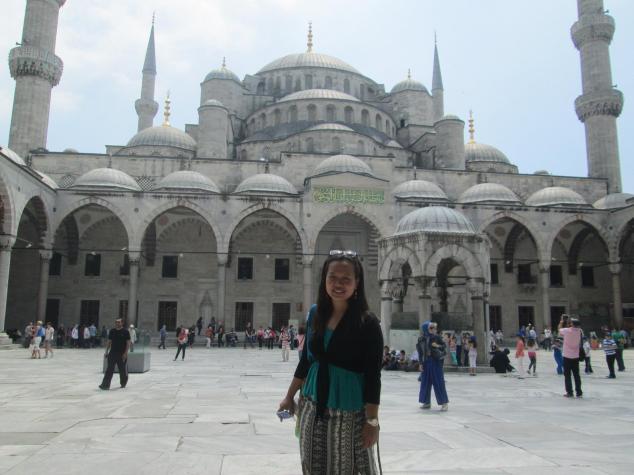 North Gate of the Blue Mosque

Stroll at Sultanamet Park with a view of the Blue Mosque

In part because I signed for a group tour, lines can be long but it is worth seeing these landmarks. I spent some time in Topkapi Palace, which has several atrium and houses important relics such as Prophet Joseph’s sauce pan, Moses’ staff and Mohammad’s beard. The palace has a breathtaking viewing point of the Bosporus and a story to go with it. Under the palace deck is a gorgeous cafe. 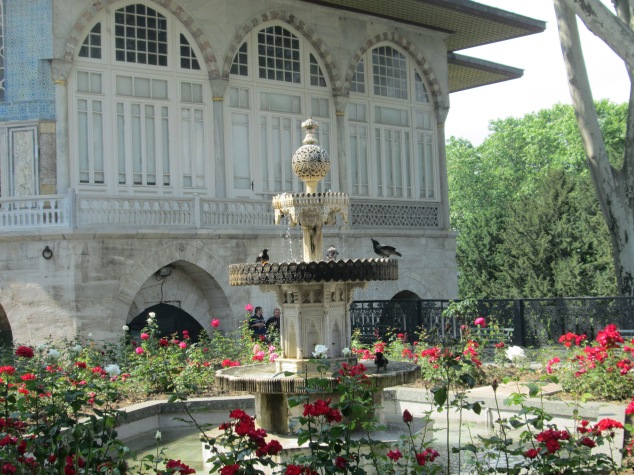 One of the lovely courtyards of Topkapi Palace 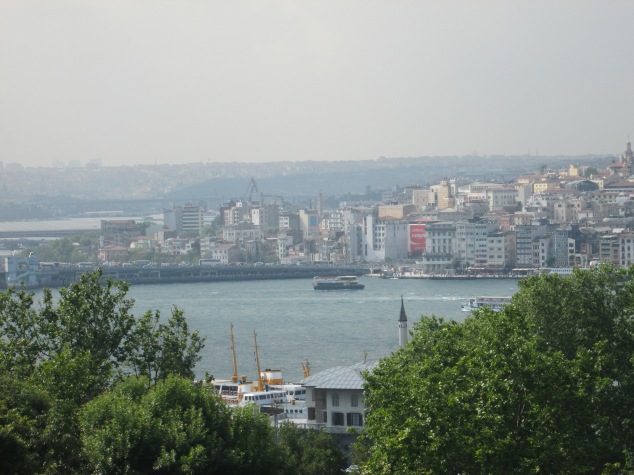 Discovering the city: Tried the tram and the metro from Sultanamet, which are good transportation options to explore the city. The tram stops at Kabatas station, where you can take a ferry or interchange to Taksim Square. From Tophane, one can walk towards the Galata Bridge and watch hooks hoping for a fish catch. The spice bazaar is not too far away. 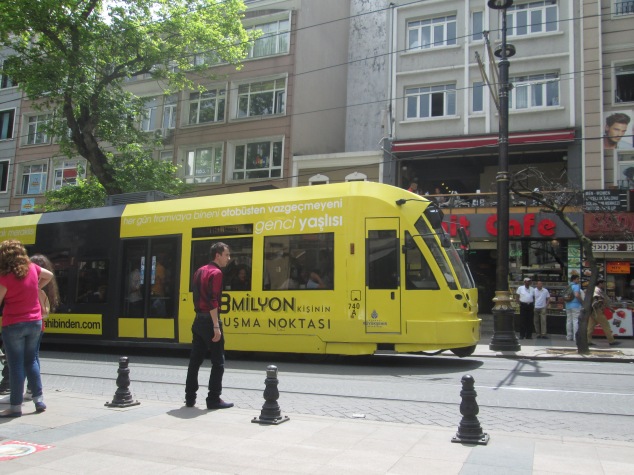 The tram passing by Sultanamet station. Fare is about 3 Turkish Lira

Ferry your worries away: On my third day, I took a ferry to Adalar viaSehri Hatlari. Ferry timings are prompt and leave as late as 8 pm from their last station. Adalar also known as Princes Island is the Byzantine version of Alcatraz, where erring princes were exiled or beheaded.  There are four island stops, taking about 95 minutes. My destination isBukuyada, the biggest of the four islands. It is now a bustling town, with a touristy center and charming old houses overlooking the Sea of Marmara.

Watch tower in one of the four islands of Adalar

No cars please. Horse-drawn carriages are an attraction here. 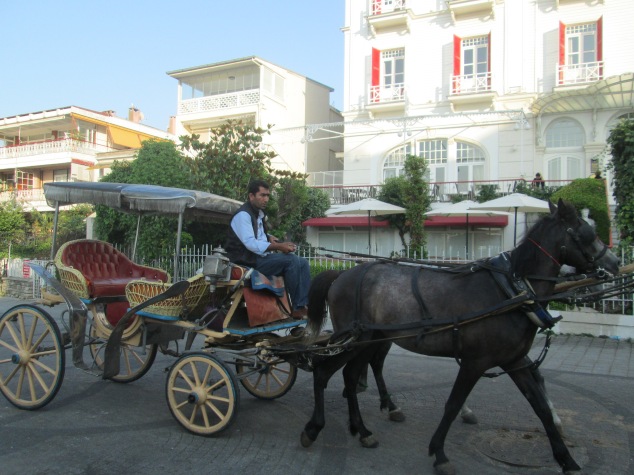 I hired a bike to get around the town as extensively as I could until about 8 pm when the ferry heads back to Istanbul. 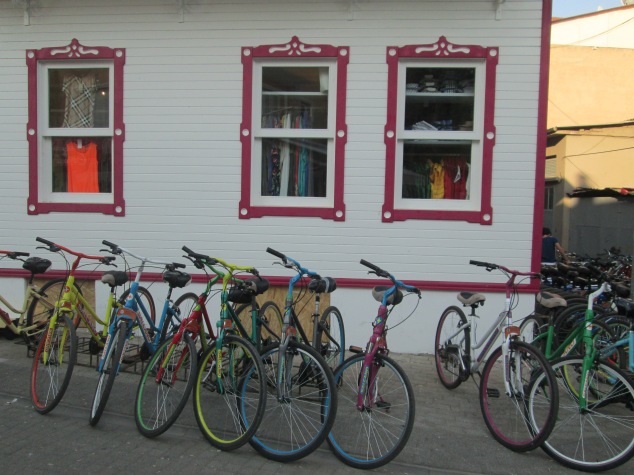 You can rent a bike for 5 Turkish Lira 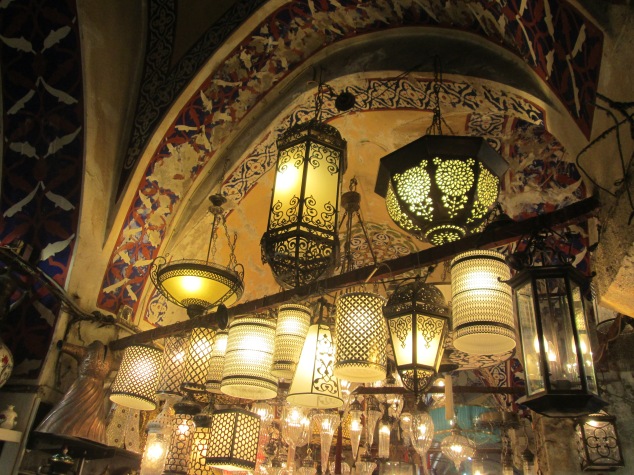 Nothing more rewarding than to end a bike ride with a nostalgic sunset by the Sea of Marmara. Breathtaking, poetic. 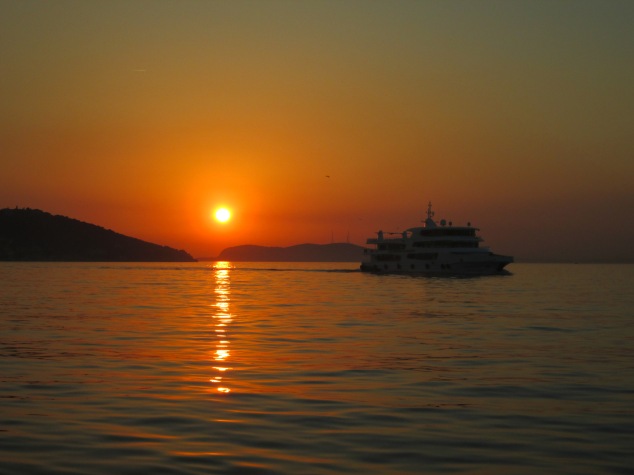 Sunset by the Sea of Marmara

Carpet beware: Shoppers will find themselves overwhelmed from trinkets, ref magnets to carpets. And speaking of carpets, while I never dream of owning a $17,000 carpet, it’s curious to see how they are woven. A guide brought me to a showroom where a Turkish woman from the east was weaving. The Turkish carpet technique is double knotting, believed to be stronger than the single-knotting method in other countries: a painstaking hand process that is almost a lost craft. 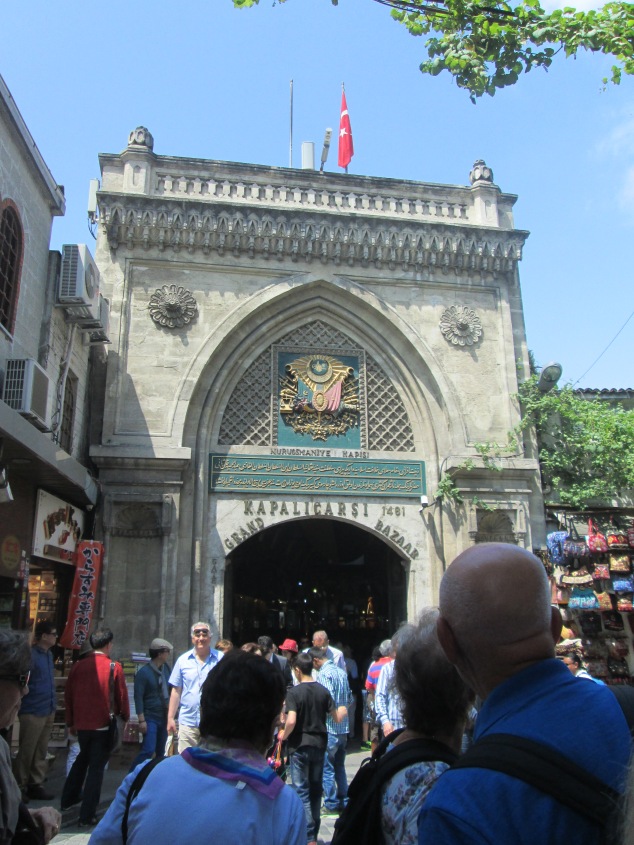 Entrance to the Grand Bazaar

Turkish delights are a popular sweet delicacy: a little gummy and sticky, with pistachio or pomegranate bits, and rolled in white powder. Not to miss is the baklava, which is best paired with tea or Turkish coffee. Since I missed eating fresh seafood, I had my fill of shrimps and sea bass. Meat dishes and dolma are worth a gustatory try. 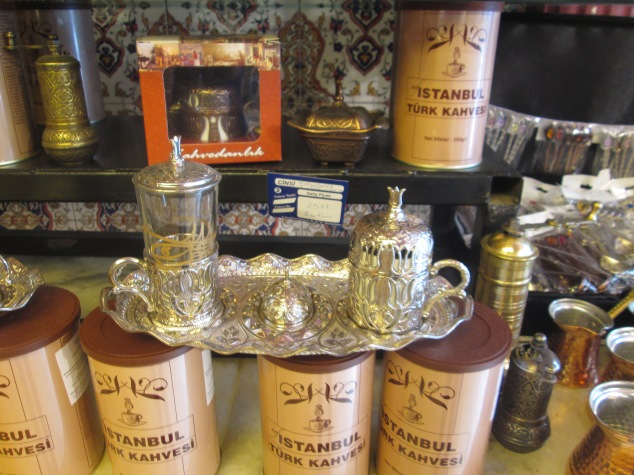 On my last day, I hopped on the underground metro and headed to Taksim Square for an afternoon stroll, with Istiklal, a high fashion street, very close by. Hitch on the old tram that passes by the square. According to wikipedia, the word Taksim means “division” or “distribution” and takes its name from the Ottoman era stone reservoir. Established under Sultan Mahmud 1, the square was originally the point where the main water lines from the north of Istanbul were collected and branched off to other parts of the city.  Today, Taksim Square is both a popular tourist site and an important venue for cultural and political events.

Walking along the historical Taksim Square

Talk to strangers with a good deal of common sense, active ears and wit to go with your own stories: I was fortunate to meet good people on my travel: An American professor and his wife Rossa and son, with a brief take on organization engagement; father and daughter on a 15-day travel of Turkey; a hip married couple who told me how they met online; a Spanish and a Costa Rican who told me stories of beautiful Cordoba and the plush islands of Central America; and an Egyptian family traveling with their daughters. After each day, I get treats from the kind hotel staff of Hotel Nena. On a Friday, I was told an earthquake hit Izmir. A bit of disaster risk reduction talk ensued about how some buildings are unsafe. Strangers had willingly taken my pictures, and the hit and miss type of photography can reveal some interesting angles. 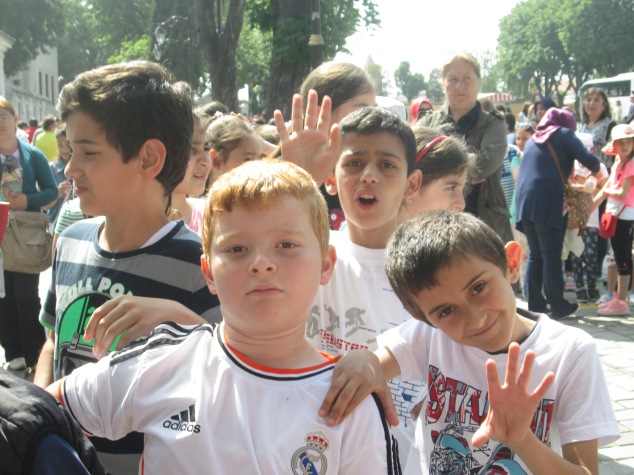 See Medusa’s head at the Basilica Cistern and have your photo taken as a sultan or a sultana. I have my photo frame version of a sultana in a blue robe.

Pray. It doesn’t take a lot of internalizing to find myself praying for solace. It is a universal language that transcends religious spaces.

A wave of serenity inside the Blue Mosque

Take it easy. With so many things to see, I didn’t want to tire myself out. I appreciated a leisurely afternoon coffee by Sultanamet or a good bottle of Efes. A walk at the park and seeing people’s expressions rejoicing in the beginnings of summer. Dressing here is quite casual and not as conservative as I expected. Worth exploring on foot is the old railway station, once a major stop-over of the Orient Express. 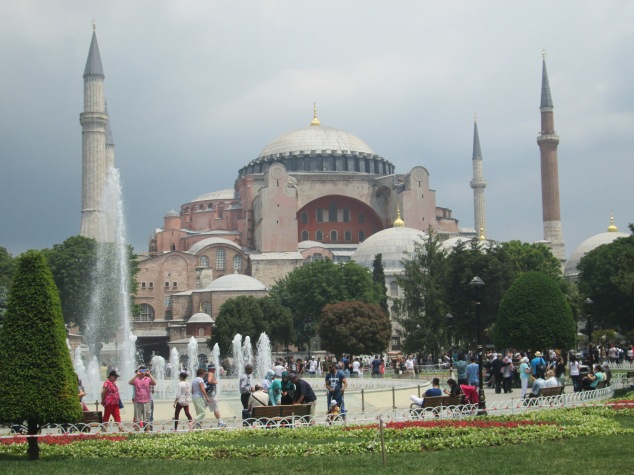 A day at the park, with a view of Hagia Sophia

What I did miss though is checking out the nightlife in Taksim and in up-and-coming sections like Nisintasi. I am hopeful  Turkey might call me back to its beautiful shores.

Crossings to places often and less traveled. A good sign

We all travel for different reasons, and my reason was to light my fire.

This article was originally published on Kathlyn's Blog, then re-published here with her permission.