For All My Fabulous Gurls on a Budget

I’ve spent countless nights bar hopping and dancing with my best friend in the gay scene in Istanbul, and I think we can provide an honest review of the places to check out in this fabulous city.

Our nights almost always start at Sugar & Spice Cafe. It’s on a narrow street off of Istiklal Caddesi, with minimalist decor, seating inside and upstairs, and most importantly, reasonably priced strong drinks! 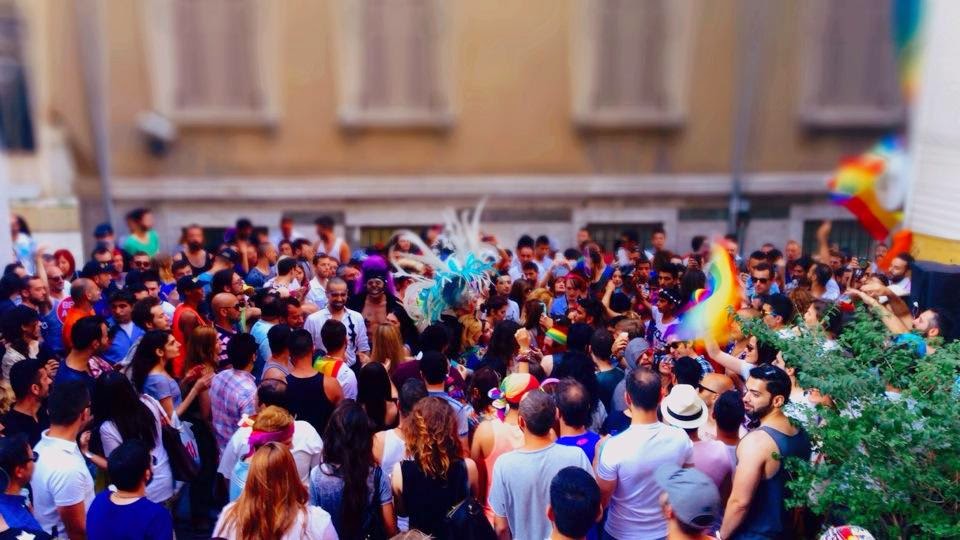 The reason why we always start here, especially in the summer, is because it’s located at a dead end street with people ending up in the courtyard, laying on big cushions, sitting on the steps or standing in groups. It’s a great place to start the night because the music is good and people almost always end up dancing, plus, most of your time will be spent checking out the other patrons! And don’t be surprised if you’re not the only expat or tourist there. I have to mention though that due to the setup it isn’t as busy during the colder months, in fact, as he puts it, “you will be disappointed.”

For those of you who would like to start early, you could stop by Chaplin Cafe and Cafe Mor Kedi before making your way over to Sugar & Spice Cafe. Both places are frequented by regulars so you may not have much luck talking to other people there.

Having said that, the crowd at Cafe Mor Kedi is a bit younger and friendlier. We would suggest going to these places expecting nothing, as the people can be a bit clique-y. You’ll end up with decent food and drinks, but just a heads up, Chaplins doesn’t serve any alcohol.

Another bar to check out is Chianti. The great thing about this place is that it’s indoors and on weekends, regardless of the weather, you can have a great time. This too is located off of Istiklal Caddesi on the second floor of what looks like an apartment building.

The bar itself is long and narrow and upon entering the place you’ll find yourself right in the middle of the hallway. There is seating scattered on both floors and a small but effective dance floor with a raised DJ booth. The music is almost always Turkish pop, but great. If people aren’t dancing then they’ll be outside, on a smallish terrace that serves its purpose, snogging or having a ciggy or watching other people snog.

Haspa Cafe & Bar “is a tiny, shoe box of a bar”, which you could check out if you’re on a super tight budget. Don’t expect anything from this place because it can be a hit or a miss.  Cheap beer and a slightly questionable crowd, with a sometime aggressive demeanor. Consider yourself warned!

After hitting a few bars you may be yearning for more, and that’s ok, because this city has you covered. One of the most popular places and the largest gay club in Istanbul is Tekyön. It may not be the first choice for a lot of locals but it does attract the most and you’re sure to meet other gay tourists there.

And due to it’s strict entry policy, you probably won’t see a lot of women inside, unless of course they’ve managed to fight their way in. The complaint I hear most often is that “it attracts mainly lower income earners, attention-seeking fems and drama queens, a few ghetto scam artists and thieves, and uptight muscle marys, who only interact among themselves and other bears.” Having said that, we always end up at Tekyon! Because of the sheer number of people that go there, you’re bound to meet someone that tickles your fancy. Although entry is free, you will spend a lot of money on drinks, so remember to pregame someplace cheaper. The inside is one large dance floor, which is almost always crammed with people, and on a Saturday night you may not have enough room to move. The club also has a covered outdoor smoking area, which at times can feel larger than the club itself. The music is a mix of Turkish pop and Techno with a few Arab tunes thrown in to please the tourists. A visit to Tekyon will render lots of sensational drama to get through over a Turkish breakfast the next morning, and above all else, a memorable experience in the gay scene in Istanbul.

Once you’ve had the Tekyon experience, and feel the need to check out some other clubs, you could head on over to Love Dance Point. This is near Taksim square, and some people prefer going there because it has arguably better music, with live performances every now and then, and a more attractive crowd. Entry is around 30TL but it gets you a drink. The club is located in a basement and is comparatively smaller. On a weekend it has a tendency of getting crowded and stuffy. But the good thing about this place is that it has a relaxed entry policy, so you can party till dawn with all your friends.

A final place to mention would be XLarge, which is the priciest option with an unnecessarily pretentious crowd that isn’t looking to meet anyone new. You could go there to check out the unapproachable gorgeous men dancing on stage but you’ll end the night walking away poorer and hating yourself just a little bit.

Just remember, there’s a great deal to see and do in the Beyoglu area, and with a dozen other places to check out, plenty of fun to be had in this city.

Wanderer and a hopeless optimist. "Twenty years from now you will be more disappointed by the things that you didn’t do than by the ones you did do. So throw off the bowlines. Catch the trade winds in your sails. Explore. Dream. Discover" – Mark Twain.