All You Want to Know About Turkish Tea & Culture

Before you come to Istanbul there is something you should know about Turks, they love their tea. Love might not even be a strong enough word, their lives are wholly consumed by the ingestion of tea. There is no facet of Turkish life in which drinking tea is not an acceptable behavior. While Turkey is almost certainly better know for it’s Turkish coffee, tea for Turks is the overwhelming drink of choice. In fact it is so popular that Turks are now the number one consumers of tea in the world  per capita, even surpassing England and China.

After living here for several years that fact didn’t necessarily surprise me, however it is still a rather amazing feat. Tea consumption here is so great that the average Turk consumes almost 7 pounds of tea per year! With all that tea consumption you may be forgiven to think that this is a long and illustrious Ottoman tradition.

However, it wasn’t until the fall of the Ottoman empire that the leader of the new Republic of Turkey, Ataturk actually encouraged switching from coffee to tea. The reason was in Ottoman times Yemen, specifically Mocha, was the producer of coffee beans, which were easily transported through the empire. However once it fell, coffee became much more expensive to import. The solution was obvious, tea could be grown easily within Turkey, thus the domestic addiction was born. The Black Sea Eastern province of Rize was perfect for tea cultivation; fertile soil, rainfall and climate were all ideal for production. Today this region is the 6th largest producer of tea in the world. 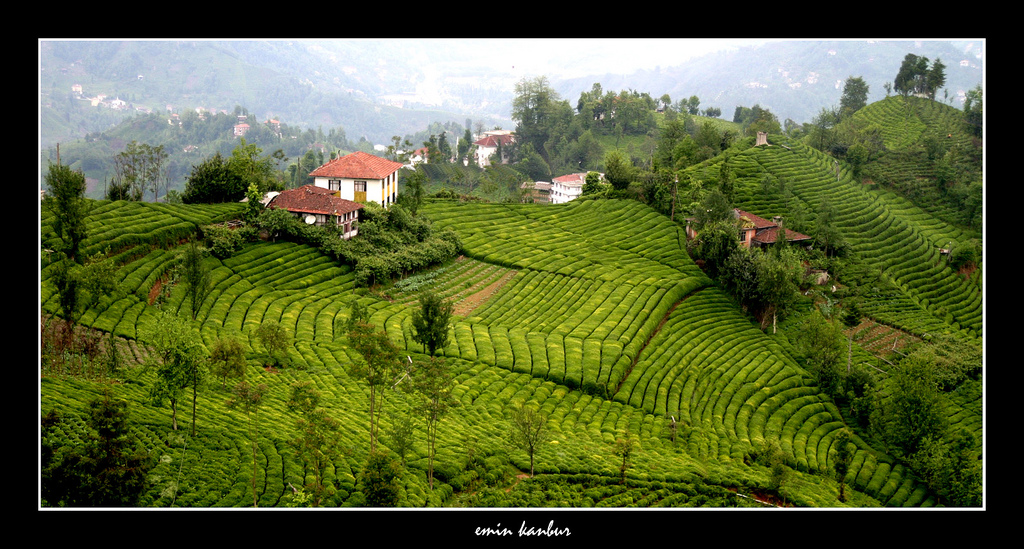 Turkish tea or cay as it is called here is a black tea which is prepared in a very specific manner. Using a double tea pot or a caydanlik, the bottom of the pot is filled with water which is set on the flame to boil. Meanwhile the top pot is filled with dry tea leaves, typically one small spoonful per drinker. When the water has reached a boil some of it is transferred to the top pot and the tea is allowed to steep for 15 minutes, but generally no longer than 30 to avoid bitterness. 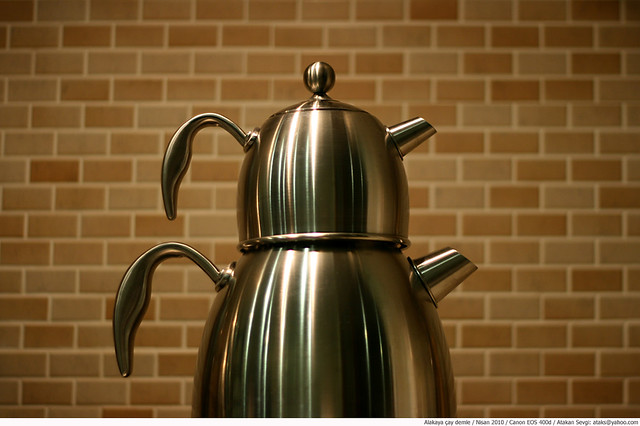 The cay is served in small tulip shaped clear glasses. The purpose of the small clear glasses is to admire the hue of the tea and to be able to consume it while it is still hot. Generally the tea is taken with two sugar cubes. As I mentioned before, there is no bad place or time to drink cay in Turkey. When I first moved here I actually found it rather overwhelming and somewhat maddening to be asked what felt like every 5 minutes “cay icer misin?” or “would you like to drink tea?”. “Thank you, but I had one 10 minutes ago!” is what I wanted to say, but instead I would politely tolerate another glass forced upon me by well meaning and hospitable Turks. 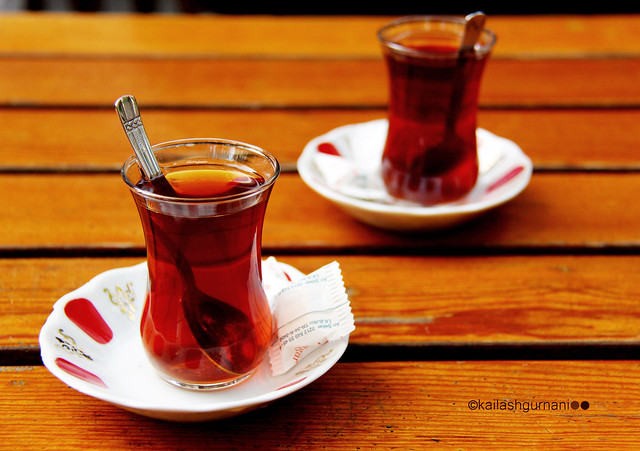 Drinking cay is such a strong part of the social fabric. If a visitor comes to the home cay is steeped. If a customer is mulling over a purchase the store-keeper will offer them a glass to assist in the process. When you come to Istanbul it will almost certainly be offered to you the moment you check-in to your hotel and that will be the first of 1000 times in your stay that you will be offered cay! Cay is served with breakfast, post lunch and post dinner as well as every break or snack in the day. A familiar sight in Turkey is the cayci or cay salesman darting across a busy road with a tray filled with cay glasses. These men are sometimes associated with shops but in other instances such as at parks or the beach, they are most likely independent.

A popular social activity in Turkey is for people, young and old to sit in cay gardens or cay bacesi where they gossip, smoke a nargile (hooka) or play backgammon. When wandering through Istanbul’s streets you will certainly come upon a cay evi or cay house. You will know it by the men of all ages sitting at tables near the street or inside playing backgammon, talking sports or politics and generally avoiding their wives!

Ladies are typically not allowed in these establishments although as a foreigner you would more than likely be tolerated. Another purpose of these cay evi and cay bacesi are to provide people some relief from the summer heat, they are very popular places to go and sit all day when the inside temperatures of peoples un-airconditioned homes can be quite uncomfortable. When you sit for cay there is some etiquette which you should be aware of. If you are taking tea in a private home almost certainly as the guest you will be served first, followed by the man of the house. Turkish women are nothing if not versed in hospitality and they will continue to serve you tea until you explode! In fact it is unheard of in Turkish culture to run out of tea while a guest is visiting. You will also most likely have a chance to sample some of your hosts baking skills. 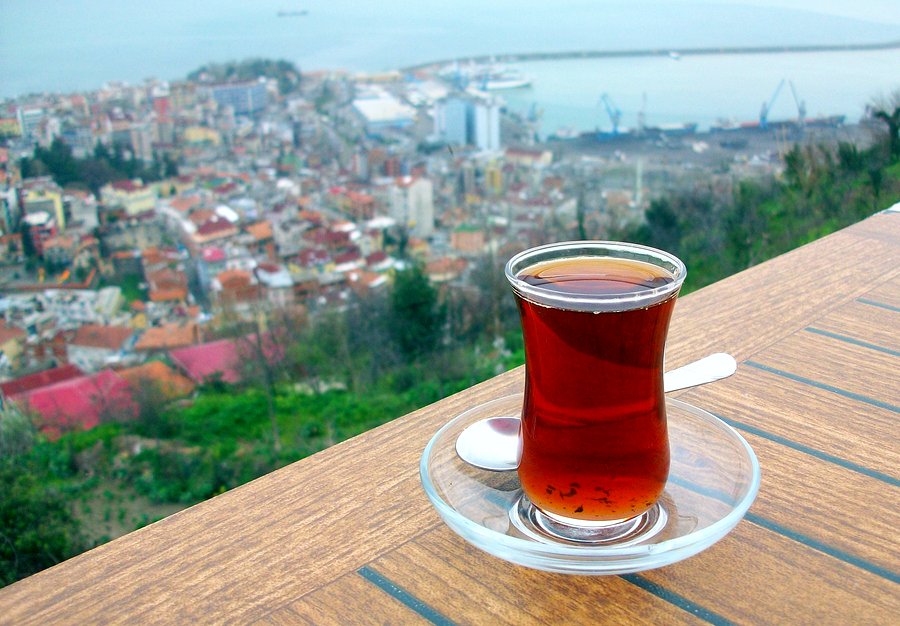 Tasty nibbles such as savory borek or sweet baklava are very common. In order to signal that you have truly had your fill of tea one places their tea-spoon on top of the glass or inside the glass. The glass may also be turned onto its side. But please don’t make the mistake of turning it upside down, that means the tea was bad! As for stopping the food from being pushed on you, I have no advice on that topic, Turkish teyzes (aunties or older women) are a force to be reckoned with! You also should not make the mistake of asking for milk with your tea, it is not done here.

You may ask that your tea be light or acik you may ask that your tea be dark or koyu and you may even ask for a lemon, but you do not as for milk! That would be scandalous. You may get a strange look or even an inquiry as to your diabetic status if you refuse sugar, but that is also acceptable. In most of Turkey teas are taken with 2 sugar cubes but an interesting practice in Eastern Turkey is for the drinker to place a hard cube of sugar called kitlama under their tongue or tucked into their cheek and have the sugar slowly dissolve while drinking the hot cay. As far as where is the best place to enjoy tea in Istanbul? There is no one best place. Every street, every park, every vista and every promenade has a cayci ready to serve you a piping hot glass of tea with the words Afiyet Olsun! (bon appetite).

For more reading on the Turkish tea culture: